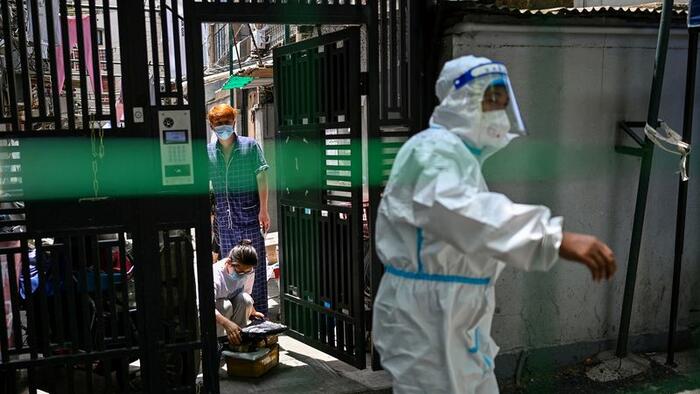 Just over a week after we reported that "Shanghai was finally lifting its Covid lockdown", China's commercial capital is once again backsliding into the warm embrace of Wuhan's proudest export, and will "briefly" lock down most of the city this weekend for mass testing as Covid-19 cases continue to emerge, causing more disruption and triggering a renewed run on groceries days after exiting a grueling two-month shutdown.

According to Bloomberg, the plan emerged from one area with a handful of cases, then spread in hours to 15 of the financial hub’s 16 districts, and now encompasses almost all of the city’s 25 million residents as health officials use testing to root out any silent transmission of the virus, a key tool in China’s "Covid Zero" arsenal.

The instant escalation reflects the worry that continues to shroud Shanghai (and also Beijing), which implemented one of the world’s strictest lockdowns in late March after a sluggish initial response to its outbreak. The newest move follows a rebound in infections within the community to six on both Thursday and Friday, up from zero a day earlier. Residents will be released after taking the tests, but they’ll be back under lockdown if new infections are found in their compounds.

There were 5 additional infections found among people in quarantine on Thursday, for a total of 11 cases in the financial hub, health officials said. Nationwide, China added 71 infections a far cry from the record high near 30,000 in April... continue reading  SOURCE

VIDEOS YOU MAY WANT TO SEE BELOW >
A Short Blast Regarding Communal Systems >
FEATURED VIDEO AND MORE FROM UK.USA ---- >
Canada Justice Minister David Lametti pushing for an orwellian society >
SEE THE VIDEO BELOW >
Shanghai Returns To Lockdown For Mass Testing Just Days After Reopening