Haiti wishes to provide legal aid to Haitian detainees in the Dominican Republic. 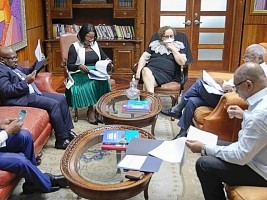 Me Miriam Germán Brito, Attorney General, was joined by Roberto Hernández Basilio, Director of Penitentiary and Correctional Services, and Hilda Patricia Lagombra Polanco, Director of Correction and Rehabilitation Centers, in welcoming a Haitian delegation led by Judith Nazareth Auguste, Minister of Haitians Living Abroad (MHAVE), and comprised of the former Ambassador of Haiti to the Dominican Republic, former Minister of MHAVE and President of
Minister Auguste expressed the government of Haiti's interest in establishing cooperation mechanisms that would allow Haiti to provide greater support to its compatriots detained in Dominican Republic detention centres.
Let us recall that 1,464 Haitians are currently imprisoned in Dominican prisons, primarily in La Victoria (363 inmates), El Seibo (110), Anamuya de Higuy (101) and La Vega (101). (100). In 2022, Haitians account for 80.08 percent of the 1,828 foreign prisoners.
Me German Brito welcomed the Government of Haiti's interest, emphasising the importance of Haiti being able to provide legal support to its citizens in conflict with Dominican criminal law, through the MHAVE and the Embassy of Haiti in Santo Domingo, as well as the Zile Foundation, to keep the lines of communication and cooperation open to deal with issues involving detainees of Haitian nationality.