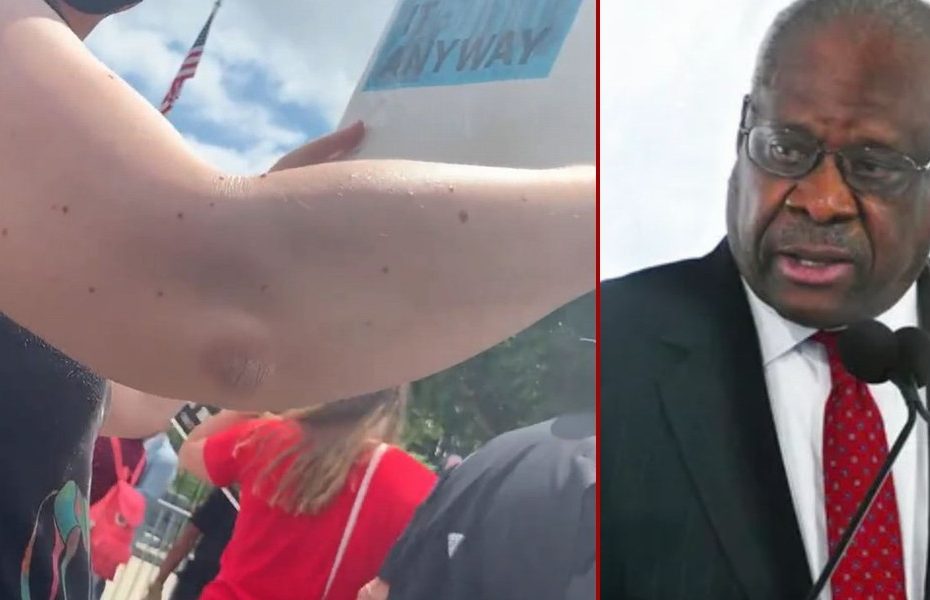 Radical protesters who had gathered to protest the Supreme Court decision overturning Roe v. Wade were handing out the address of Supreme Court Justice Clarence Thomas, according to a new report from the scene.

Luke Mosiman of the Maricopa County Young Republicans posted the video confronting the protesters in front of the Supreme Court who were organizing the alleged threat against the justice.

“Why are you assaulting a justice and going to their house?” Mosiman said. “Don’t you feel like… that side goes against the Republic and the system. Why would you do such a thing? I would never do that if I disagreed with the case.”

“All I can say is that, you know, we go out there, the police are out there, if it was an issue, they would probably arrest us, so,” a protester with a sign said.

“Well, I understand that,” the protester said. “And we’ve had people come and ask the police to arrest us. And so far they haven’t, so…”

“Well, I hope you get arrested tonight. What else can I say?” he added....continue reading  SOURCE

VIDEOS YOU MAY WANT TO SEE BELOW >
MIT Scientist, LINKS COVID VAXX AND SEVERE DISEAS… >
FEATURED VIDEO AND MORE FROM UK.USA ---- >
CERN | Occult Ritual Performed On The Grounds Of CERN 2016 >
SEE THE VIDEO BELOW >
Radical protesters *BUSTED* making an organized threat against a Supreme Court justice